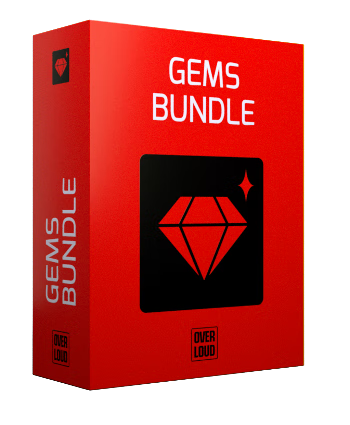 The Gems Bundle allows to purchase all the available Overloud Gems plugins at a very advantageous price.

Originally created for a vinyl transfer console, this EQ has then been used for both mixing and mastering thanks to its super musical curves.

Overloud TAPEDESK combines a Tape Machine and multiple Console models into a single plugin, to replicate the warm tones of an analog mixing workflow.

Overloud EQ84 is the simulation of one of the most renowned Discrete Class A British EQ, used in countless hits from the ‘70s to nowadays.

Dopamine is designed to revive individual tracks as well as complex mixes while preserving their natural tone. It dynamically balances the harmonics that naturally exist in the original audio rather than generating non-existent harmonics by synthesizing them.

Sculptube is a processor dedicated to adding valve-produced harmonics to sounds. It creates an authentic tube coloration which goes from slightly warmed-up tones to heavy distortions.

Overloud EQ550 is modeled after a renowned American EQ created with custom op-amps. It has a Proportional-Q design, meaning that the bandwidth of the filters becomes narrow when the gain of the filter increases. This design makes the EQ550 unique.

ECHOSON is the Overloud recreation of a legendary Italian magnetic drum delay unit. Its unique tone defined the Pink Floyd sound in the ’70s.

Comp670 is the Overloud recreation of a very rare legendary tube compressor. It has a unique and distinctive tone thanks to large amount of transformers in the signal chain which gives it a very warm tone.

The Overloud Tapped Delay is the recreation of a unique analog processor which delivers modulating tap delays along with sound widening effects. 6 analog bucket-brigade delays can be individually switched and panned to create custom delay patterns.

Overloud Comp LA is the revolutionary simulation of two legendary optical compressors into a single plug-in. The 2A version is tube-based and delivers a warmer, harmonically rich tone. The 3A version is solid-state based and has a faster attack, cleaner tone.

VOICE is the new Gem plug-in designed for vocal processing.

VOICE offers a comprehensive and streamlined vocal production workflow, based on analog processors, including

The Gem MODULA includes three of the most iconic modulation units in a single plugin. In addition to offering the most faithful emulation available today, it allows to extend the original tone capabilities by adding many features not available on the analog units.

The Gem EQP is the most realistic and accurate emulation of three iconic Passive EQ units, in a single plugin. In addition to offering the most faithful emulation available today, it allows to extend the original tone capabilities by adding features which are not available on the analog units.

Mac OS X 10.9 Mavericks and above are supported.